OUR MACHINING AND FABRICATION STAFF IN THE GREATER HOUSTON AREA

Alan started with A&A in 1978, working during summers. He joined the company full time in 1990 as a Machine Shop Coordinator, was promoted to Fab Shop Coord. in 1996, Fabrication Manager in 1999, General Manager in 2005, Vice-President in 2008 and President, CEO, and owner in 2009. His responsibilities include daily Management of the Manufacturing Facility and Staff. Alan works closely with the Corporate Accounting Manager to insure for the financial stability and integrity of A&A. Alan holds a B.S. in Engineering Technology (Manufacturing) from Texas A&M University.

After completing his apprenticeship and six years as a Machinist, David became the Machine Dept. Foreman in 1988, was promoted to Department Manager in 2005, and Vice President and owner in 2009. He is responsible for supervising all the staff in the daily activities of the Machine Dept. and the CNC dept. including job planning, material takeoffs, and coordination between Machine and Fabrication Dept.'s.

Steve joined the A&A team in 2009 after working several years in mission operations at NASA and project management software for the oil and gas industry. He holds a Bachelor of Science degree in Mechanical Engineering from Iowa State University, a Master of Science degree in Computer Engineering from the University of Houston – Clear Lake, and a MBA from the University of Houston - Clear Lake. Steve interfaces with all members of A&A by managing the information technology system.

Whitney is the Human Resource & Safety Manger for A&A- She is responsible for the payroll and benefits administration, recruiting, hiring, wellness program and the safety of the employees. Whitney received her Bachelors in Science- Business-Human Resource Management from Western Governors University-Texas and in 2017, completed her Masters in Business Administration from Western Governors University-Texas. Whitney’s wellness program was awarded the 2017 Cigna Wellbeing award for the outstanding culture of wellbeing, and she was named one of the Top 40 Young Professionals under the age of 40 in 2018 for the Galveston Daily News.

Marie started with A&A in 2011 and has over 20 years of experience in accounting with the last 15 being in manufacturing. Her expertise is in financial and cost accounting. Marie graduated from Central Missouri State University with a BSBA in Accounting and Finance in 1989 and earned her MA in Accounting in 1991.

Stacey is a customer liaison with responsibilities that include processing customer's orders and electronically cataloging customer correspondence and drawings as well as internal engineered drawings.

Jan is responsible for the daily issuance of invoices to customers as well as the collection of those invoices - essential accounts receivable functions. In addition to her responsibilities here, Jan is an accomplished bassoonist that teaches and performs locally.

Jessica began working for A&A Machine & Fabrication in July of 2013. She works as part of the accounting team as the Accounts Payable Specialist. Prior to A&A, Jessica worked in sales as an Account Manager for 10 years.

Jon is A&A’s Warehouse Coordinator and is responsible for all material handling and shipping/receiving at A&A. He oversees inventory items, receiving inspection and processing, receiving and control of customer owned materials and parts, sawing of material for jobs and coordinating shipping to all domestic and overseas customers.

Patrick joined A&A in 1983 and served his apprenticeship through 1987. He spent the next 10 years as a machinist, developing skills in every area of the machine shop. In 1996 he became involved in sales, maintaining existing accounts. Patrick is now responsible for expanding A&A's territory through both new and existing customers 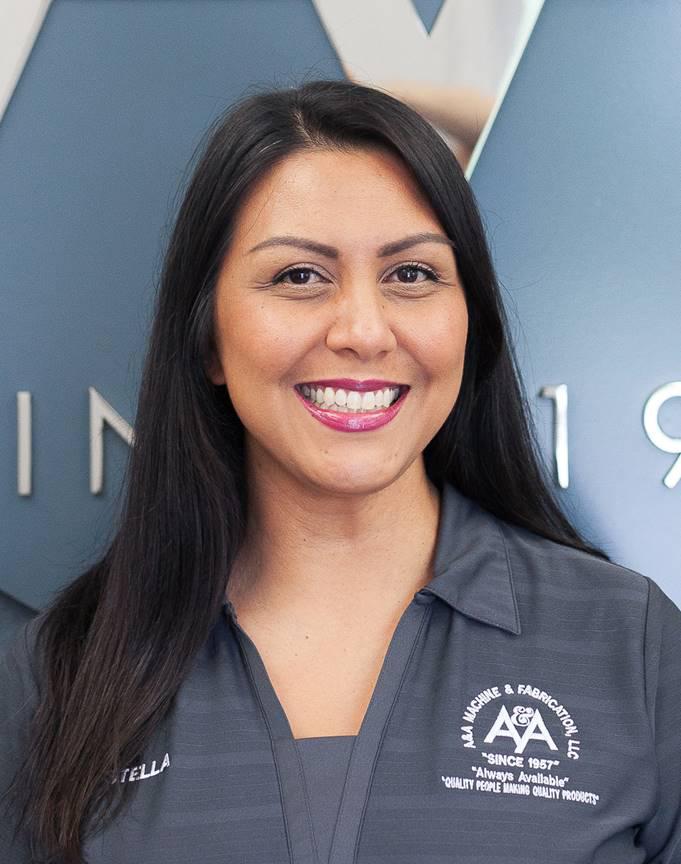 Stella joined the team in 2018 after working in procurement for one of A&A’s key customers, following a decade of operating her own business as a consultant.  As a Client Account Representative, Stella is responsible for maintaining & expanding existing accounts, as well as acquiring new opportunities for A&A to support.  Stella also helps manage the website and social media strategies. 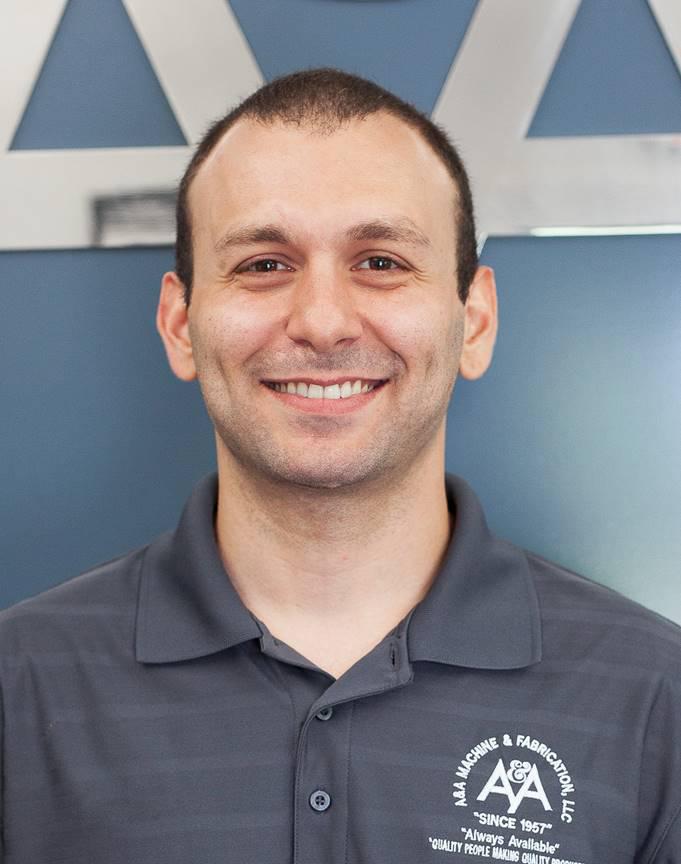 Gabriel is the Business Development Technical Sales Manager for A&A. He graduated from The University of Texas at Austin with a Bachelor of Science degree in Microbiology.  Gabe has held sales and business development positions spanning multiple industries. He made his most recent transition from the corrosion prevention and plastic lining industries. Gabriel’s focus is expanding A&A’s brand and reach by forming long-lasting relationships with new and existing clients.

Taylor completed an internship at A&A in 2006 before graduating in 2008 with a degree in Mechanical Engineering. He worked at Cessna Aircraft before joining A&A in 2010. He is primarily responsible for generating engineering drawings for many of the Fabrication projects and earned his Professional Engineer's license in 2014.

Tim joined A&A Machine & Fabrication, LLC, in February 2014 as a Project Manager and Estimator for ASME Code Vessels. Tim has 25 years of experience in ASME Code Fabrication (shop and field) industry - boilers, pressure vessels, tanks, heat exchangers, and auxiliary systems. He graduated in 1989 with a B.S. Degree in Mechanical Engineering from the University of Tennessee at Martin. 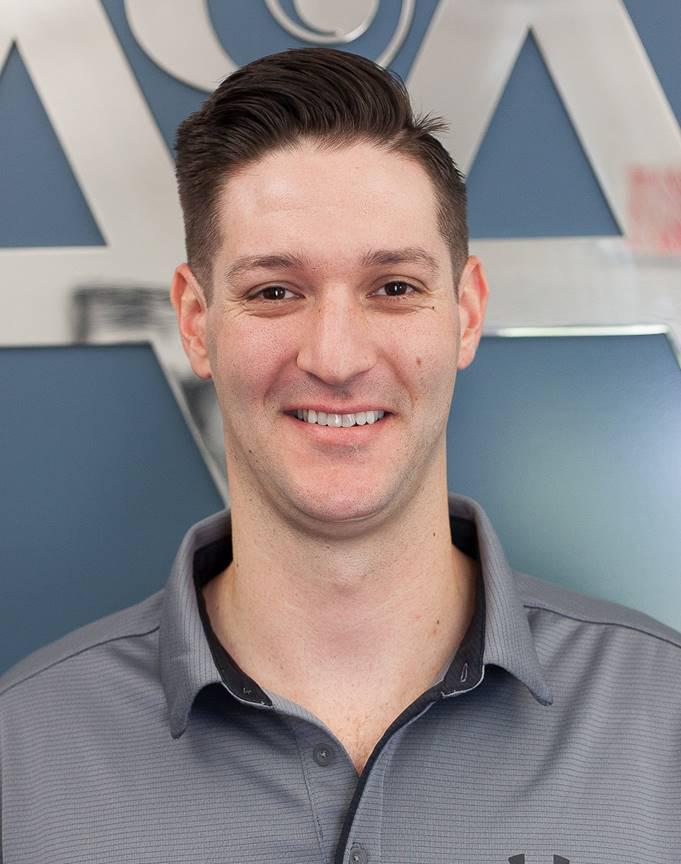 Robert worked as a CNC operator before completing a Fabrication Internship with A&A. After graduating from Texas A&M University with a B.S. in Mechanical Engineering, he worked in the field providing services to the energy industry. He joined A&A in 2018. Robert is responsible for the management and execution of projects, as well as generating engineering drawings for production.

Leininey is a Project Manager for the Fabrication Department at A&A. She is in charge of initiating, planning, executing, controlling and meeting specific deadline criteria at the specified time. Leininey has a Bachelor of Science Degree in Industrial Technology (Drafting Design) and 10 years of experience working in the oil and gas industry drafting drawings for various types of strainers, running calculations, managing projects and material procurement.

Theresa is the Purchasing Agent at A&A for the Fabrication Department. She has a culmination of over 30 years of buying experience between the Department of Defense and various Domestic and International projects in the Oil and Gas industry. Theresa received her B.S. Degree from the University of Houston-Victoria. She is also a United States Army veteran who served in Dhahran during Operation Desert Storm Campaign. Theresa is responsible for sourcing products and services to meet production schedules in manufacturing and meet our customer delivery needs.

网赚试玩神器Paul joined A&A in 2011 to carry out Technical Sales and Proposals.

网赚试玩神器He worked for A&A from 1975 thru 1981 as Project Coordinator in the fabrication of LDPE cooler and reactor projects.

Paul holds a B.S. degree in Industrial Technology (manufacturing) from The University of Texas, Tyler. With over 35 years experience in manufacturing Paul can assist you with your requirements from design thru fabrication.

网赚试玩神器Rodney started at A&A in 2008 as machine shop truck driver delivering and picking up machined parts, material, and finished goods to A&A vendors and customers throughout the Houston area. In 2013 he was promoted to Service Coordinator in charge of outsourcing work to our vendors and overseeing the machine shop driver.

David began working at A&A as a helper in the Fabrication Dept. for the summer of 1984. David continued his education and returned to A&A in May of 1985 as a full time employee working in the Fabrication Dept. In 1987 David began working as an apprentice in A&A’s CNC department. David continued to hone his skills over the years and now serves as CNC foreman, overseeing the CNC floor operations.

Chuck Mutina hired on with A&A in March of 2014 and was part of the manual machine shop. Chuck was given the offer of Machine Shop Estimator in January of 2015 but still makes time to work in the shop when he can. Prior to A&A, Chuck has 12 years experience in management and sales and an additional 9 years in manual and CNC machining.